Could Pooping in a Box Save the Developing World? 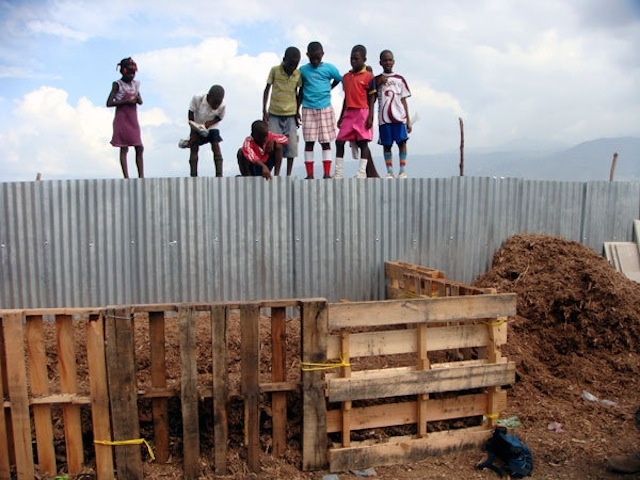 Featured on VICE at: http://www.vice.com/read/could-pooping-in-a-box-save-the-developing-world

Joe Jenkins has been saving his shit for 37 years. The 61-year-old thinks that to do otherwise—to flush the toilet after you’ve finished defecating into it—is a waste of perfectly good drinking water and valuable turds. Instead, you should do your business in a box to collect your household’s urine and poop, then add that waste to your compost bin and use it to fertilize your garden.

Jenkins began writing a book on human composting in the early 90s as a master’s thesis at Pennsylvania’s Slippery Rock University, and self-published The Humanure Handbook in 1995. The book, now in its third edition, has sold more than 25,000 copies in 59 countries, according to Jenkins, and the Amazon description boasts that it’s “the most comprehensive, up-to-date and thoroughly researched book on the topic of composting human manure available anywhere,” though you have to wonder how much competition there is for that title.

The Jenkins method of human composting doesn’t involve water, electricity, or fancy equipment—all you need is a Loveable Loo, which is essentially just a wooden receptacle that you piss and shit into. For $299, Jenkins’s humanure store will ship one to you, or you can follow his instructionsand build your own. This involves drilling four plywood pieces together into a box shape, inserting a waterproof bucket with a lid, screwing on a piece of plywood with a hole in it, then mounting a standard toilet seat cover on the top. Then you too can be take part in the humanure process. Here’s how that works:

–Every time you use your Loveable Loo, you have to cover your pee and poop with a layer of organic material to help the composting process along and mask the smell. Most humanure composters keep a bucket of such material next to their toilets—Jenkins uses sawdust, but other readily available materials, like peat moss and coffee grounds, are fine.

–Hopefully, you already have a compost bin in your yard or on your roof, because when your Loveable Loo’s bucket is filled, it has to be emptied into something. This bin can be built with bricks, wood, or bamboo—you just need something stable.

–You should keep the humanure in the compost bin covered with a layer of heavy material (like weeds, hay, or leaves) to keep it from smelling and to discourage flies. Whenever new organic material is added to the bin, create a hole in the middle of the pile, dump in the new crap, and cover it with the old crap.

–Heat, time, and tiny critters will then go to work breaking it all down and killing the bacteria in the waste—the pile will reach temperatures reaching upwards of 160 degrees through a process called thermophilic composting. After several months, this material can be used as fertilizer to grow food, which you can then eat and turn into humanure. The circle of life!

“The compost feeds the soil, the soil feeds the plants, and the plants feed the animals, which includes us,“ Jenkins told me over the phone. “In order for people to really understand the full value of this process, it has to go through the entire process—to where you’re eating the food [you grew] and then taking a shit again. Eventually… you’re thinking, Holy shit, I didn’t produce any sewage. There was no waste.”

Jenkins uses this process on his 143-acre garden and orchard in northeastern Pennsylvania, where he grows food for his family. His bread and butter is selling slate roofing tools, but he also spends a lot of time hosting human composting workshops and speaking engagements nationally and worldwide.

His one-man poop crusade has gotten a decent amount of press over the years. Most recently, the History Channel’s Only in America, hosted by Larry the Cable Guy, did a segment on Jenkins and his Loveable Loos last year in which Jenkins promised the comedian that if he had a turd, they’d make a tomato out of it.

The important thing about recycling your waste this way is that you don’t need water, electricity, or costly equipment, which makes it ideal for developing countries where poop is a serious problem—last month, the United Nations reported that a billion people still go to the bathroom in the open air, endangering public health in many of the world’s poorer regions.

Jenkins has been working on solving this problem by spreading the gospel of the Loveable Loo. In 2006 he went to Mongolia to teach residents how to build his poop boxes, and last April, he hosted a workshop in Mozambique, but his greatest success may have been in Haiti. He visited the island nation in 2010, as it was recovering from the disastrous earthquake that hit it in January. Since then the system has spread across Haiti to a dozen schools and orphanages, a bunch of low-income families in the town of Santo, and a host of other places.

Other countries where Loveable Loos could have an impact include Ghana, where 10,000 public schools don’t have toilets, and India, where half the population, or more than 600 million people, defecate in the open air, according to estimates by the World Health Organization and UNICEF. Humanure, proponents say, could solve the problem of open defecation and simultaneously provide a boost to agriculture at a minimal cost.

Sustainable Organic Integrated Livelihoods (SOIL), a Haitian nonprofit that focuses on bringing its collection of ecological sanitation toilet models to Haitian homes and businesses. SOIL founder Sasha Kramer thinks Jenkins low-tech technology has potential, though there are some logistical snags in implementing it.

Kramer told me many janitors and maintenance workers in buildings where Loveable Loos have been installed get the added duty of handling the poop without any help or rise in pay.

“People are more likely to take care of a toilet that they rent for their homes than in a school where they often fall into disrepair when the school does not pay someone to maintain it, as is often the case,” Kramer said.

According to Jenkins, the reason humanure isn’t more widely used throughout the developing world is that the people who make policy decisions in governments and at NGOs turn up their noses at the idea.

“They already know everything. They already have their minds made up. Their idea of success in life is a flush toilet,” Jenkins said. “When I worked in Mongolia, for example, the woman in the Department of Health couldn’t imagine using a composting-type toilet. To her, it was like, Ew, its going to smell… She was resistant to it because of that. Not because there was any other reason—just because of her psychological state.”

Although he said that “the white people I’ve worked with are such pains in the ass,” Jenkins said that the communities he’s worked with directly are much more receptive to the idea of Loveable Loos, possibly because they don’t have such hang-ups about the stuff that comes out of their butts.

Skipping the bureaucracy and bringing composting toilets straight to the people also has the advantage of letting would-be humanurists know what they’re in for. Kramer told me that working with individual families is more sustainable when people choose to have the service and understand the commitment.

“The humanure system is very simple and it doesn’t cost any money or technology,” Jenkins said. “If they have the knowledge and can scrape up some leaves or slice down some grasses, then they could be recycling their humanure and not polluting the world with it, and in the process fortifying their soil and getting better food. That’s why I teach people about it. You don’t need a permit or Bill Gates or the US government; you can just do it yourself.”