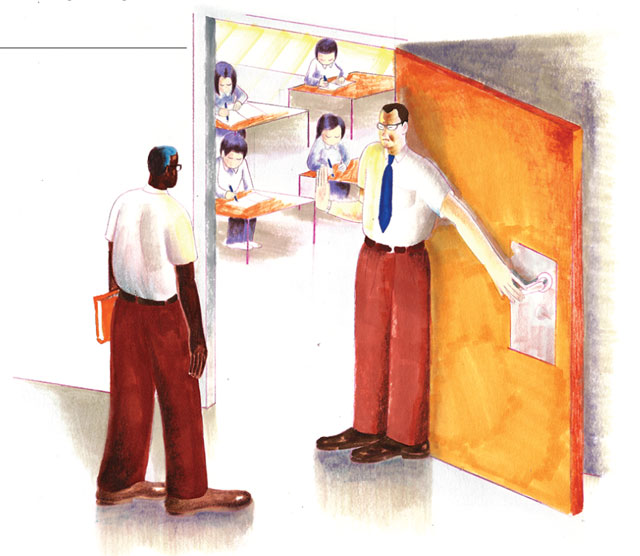 Every year, hundreds of young English speakers drift into East Asia, looking to while away a couple of aimless years between college and the inevitable round of grad school applications that await them back home. Korea is an especially popular destination: The Seoul Metropolitan Office of Education alone plans to hire 655 foreign teachers in 2014, a fraction of the 22,000 expat educators working in the country. But if you want to teach English in Korea, it’s a lot easier if you’re white.

For most would-be instructors, the racism begins before the even get through the door, thanks to the standard South Korean practice of requiring applicants to submit photos alongside their resumes. Some employers are more blunt: A recent Craigslist ad for English teachers from TalknLearn, a Seoul language academy, simply states, “Need: White” on its list of required qualifications. When black teachers do make it into the classroom, they’re often passed over in favor of their white counterparts.

“I’ve had kids pulled from my class and placed in Caucasian teachers’ classes due to the request of the parents wanting their child to learn from a white American and not a black one,” said Megan Stevinson, an American English teacher in Seoul, whose parents are black and Korean.

Selin Jung, a Korean middle school student, laid out the logic for me: “Many Korean students like white teachers more than black teachers,” Jung said. “They think white teachers are more clean and have better pronunciation.”

Discrimination against foreigners has long been rampant in ethnically homogenous South Korea, where more one in three people say they would not want a neighbor of a different race, according to 2010 data from the World Values Survey. The country’s relative isolation, coupled with sporadic subjugations by its more powerful neighbors, have infused South Korean nationalism with a sense of ethnic identity and racial purity, and those perceptions are only now starting to shift as Koreans adapt to globalization, said Charles Armstrong, a professor of Korean studies at Columbia University.

“Koreans’ nationalism is a modern phenomenon with roots in Korea’s history of relative isolation and self-enclosed identity in the face of powerful threats and occasional invasions from China, Japan, and more recently Europe and the US,” Armstrong told me. “Until recently, Korean identity was very much bound up with the idea of ethnic community.”

This might explain a certain amount of ignorance when it comes to foreigners. But Koreans’ racism toward black teachers is confusing, as they welcome white English speakers with open arms. “Koreans tend to distinguish between real, or white, foreigners, who are treated with some respect, and people of color who tend to be looked down on,” Armstrong explained. As a result, he said, “there is definitely a preference for white, and male, teachers of English.”

Just in the past year, a sketch comedy show on state-funded TV had actors donning blackface, and a Korean cigarette company ran an ad that featured monkeys dressed as reporters shouting, “Africa is coming!” to promote a line of cigarettes containing African tobacco. (That ad was later pulled after accusations of racism.)

“I think many Koreans are fearful because someone has given them incorrect information,” said Patricka Hogue, a former professor at Soonchunhyang University in Asan, South Korea. “Then they have ignorance because they’re happy perpetuating that information and stereotypes.”

Whatever the reason for the racism encountered by English teachers, blatantly discriminatory hiring practices are a black eye for South Korea as the country struggles to adapt to its growing role in the global economy. A 2011 survey conducted by the Joint Committee with Migrants in Korea found that out of 931 foreign migrant workers, 78 percent said they had been verbally assaulted.

To combat this and other abusive workplace practices, Korean lawmakers drafted anti-discrimination legislation in February 2013 that would have prohibited employers from discriminating against applicants based on ethnicity, skin color, age, sexual orientation, and other factors. But the bill faced heavy opposition from corporations and conservative Christian groups, who attacked it as pro–North Korean and pro-gay, and was killed in April. For now, those “Need: White” Craigslist ads are going to stay up.